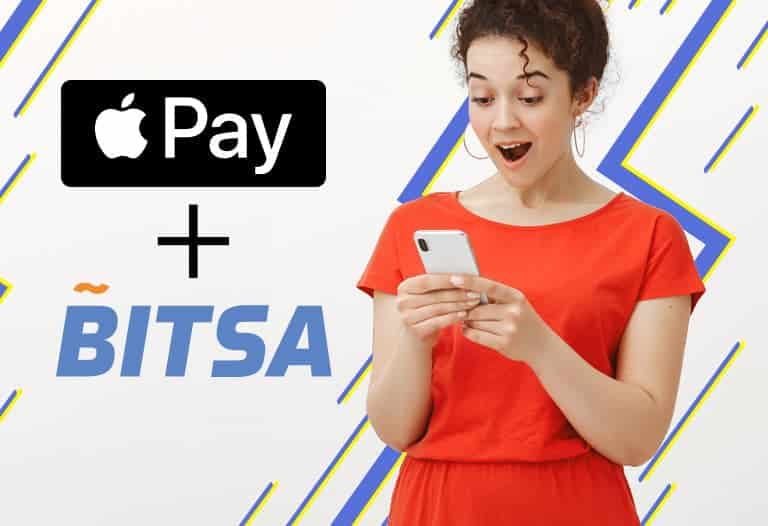 What is Apple Pay? Now you can have your Bitsa on your iPhone!

Posted at 09 Jan 10:59h in Bitsa, BITZER|Press Release|Product by Stefano

Apple Pay is a technology to pay contactless from Apple devices. It is designed with the objective of simplifying the payment processes through an Iphone or an Apple Watch, without the need for the user to carry his physical card.

From today, all Bitsa customers will be able to use it to shop in thousands of stores integrating their Bitsa cards to their Apple devices (either iPhone or Apple Watch).

Apple’s service allows users to pay for in-store purchases instantly using Near field communication (NFC) technology in conjunction with Touch ID and Passbook. Although it can also be used to purchase products on applications or websites.

If you want to know a little more about what Apple Pay is, how it works, and how you can set it up, read this comprehensive guide to Apple Pay.

How to set up Apple Pay?

With Apple Pay, you can add credit, debit, or prepaid cards to iPhone, iPad, Apple Watch, or Mac. In this case, we will explain how to add your Bitsa card from your iPhone:

– Add your card data manually or by scanning with the camera.

– Verify your identity through an SMS to your mobile.

With these simple steps, you will have your card ready to buy!

Where and how can you use Apple Pay?

Apple has the backing of millions of stores around the world. Imagine that, for example, more than 75% of US stores and restaurants support Apple Pay. In the United Kingdom, the percentage increases to 85% and in Australia this figure reaches 99%.

Among the best-known shops we can name:

How to pay with your iPhone?

Apple Pay requires that your device have the communication antenna for contactless payments (NFC) and Touch ID or Face ID on iPhone 6 and later.

To pay with iPhones with Touch ID, you need to double-tap the Touch ID home button and keep your finger on it until the screen says «Hold Near Reader». If your fingerprint is not recognized, you can choose the option «Pay with password».

If instead, you want to pay with an iPhone that has Face ID technology, you will have to press the sleep/wake button on the right side of your iPhone twice to start Apple Pay. The authorization will be done through Face ID, or you can choose the “Pay with password” option if your face is not recognized. Once authorized, your screen will revert to “Hold Near Reader”»

Once your iPhone says “wait near the reader,” you can place your iPhone near a contactless terminal and a subtle vibration or ping! (if your phone is not silent) will confirm the payment. All in a matter of seconds.

Which devices work with Apple Pay?

How safe is Apple Pay?

Apple has publicly stated that it does not store its users’ transaction information or card numbers on its servers.

Apple Pay, which has a tokenized backend infrastructure, secures card payments by creating a number or token that replaces your card details. More specifically, create a Device Account Number for each of your cards.

According to Apple, the device’s account number is securely assigned, encrypted and stored in the secure item, a dedicated chip on iPhone and Apple Watch, and when a payment is initiated, the token is passed to the retailer or merchant. Therefore, the retailer or trader never has direct access to your card data.

What happens if you lose your iPhone or watch?

Because every Apple Pay transaction has to be backed up by your fingerprint, face, or access code, anyone who finds your iPhone or smartwatch won’t be able to pay for anything unless they have your access code. You will only be able to see your billing address and the last 4 digits of your stored cards.

To learn more about integrating your Bitsa card into Apple Pay, see this article in which our CEO Marcos Muñoz talks about the importance and consequences of this development.