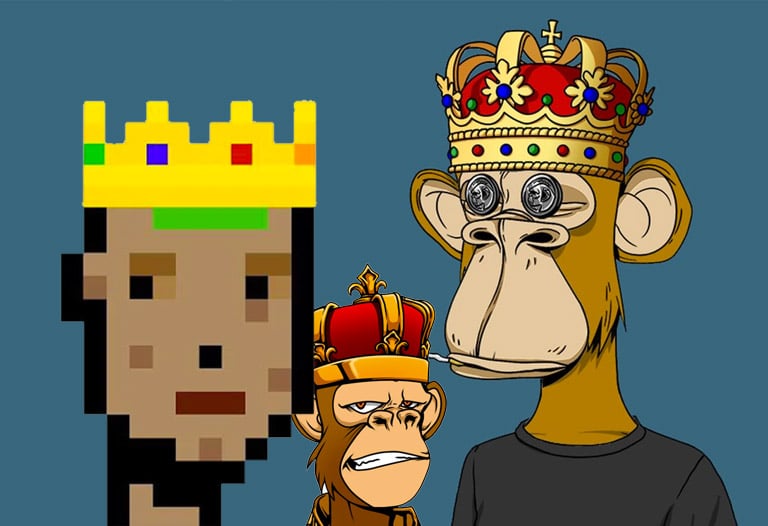 Non-fungible tokens have the potential to transform the way we register ownership of real-world items. Today, however, we will focus on a particular and, one might say, somewhat superficial use of them. We will find out which are the most popular NFT collections.

During the year 2021, the popularity of these collectibles reached unexpected levels. Vitalik Buterin himself, the co-founder of the Ethereum network, stated that he never imagined what we have seen in the past year.

What is certain is that the NFT collections made the front pages, accompanied by a monumental price increase. Today we will review which, in our opinion, have been the most popular collections.

What makes an NFT collection popular?

It is clear that price is perhaps one of the main aspects that allow a collection of NFTs to catch everyone’s attention. Once prices start to rise and trading volume increases, the FOMO around a collection becomes unstoppable.

However, if the collection has something else to offer, or simply if its designs manage to spark the collector’s interest, a community will start to form around it, and that is when popularity comes.

Another point, which can greatly increase the popularity of a collection of NFTs, is celebrity collaborations or purchases. Snoop Dog, Justin Bieber and Jimmy Fallon are some of those who have become involved in this world.

The collections that we are going to analyze today, have different characteristics that have made them arrive at being known by almost everyone who is in the ecosystem, but all of them coincide in the fact that at least for a while prices have caught some momentum.

After this short explanation, let’s review the five most popular NFT collections.

This was a collection that came from the collaboration of, the famous Japanese artist Takashi Murakami with RTFKT. If you don’t know them, RTFKT is a maker-led organization, owned by the sports clothing giant Nike since the end of last year, which is focused on the development of NFTs, blockchain authentication and augmented reality.

Together, they created 20,000 avatars for this incredible NFT collection. As with everything Murakami is involved in, the front pages have received it with great enthusiasm. It goes without saying that without their participation we would not be including them in the list of the most popular NFT collections.

These 20,000 clones are divided into eight “DNA types”, each with varying degrees of rarity.  Of course, collectors were waiting to mine one designed by the “Japanese Andy Warhol”.

Beyond this collaboration, their owners have, on more than one occasion, received new drops, which has generated a great deal of loyalty in the X-Clone holders. This loyalty, expressed via social media, has been the perfect combo to increase their popularity. 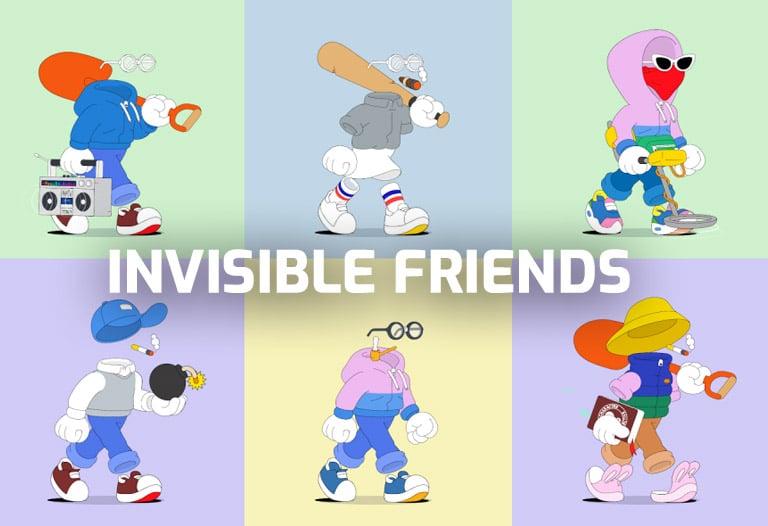 The Invisible Friends has been, without a doubt, one of the most loved NFT collections on the ecosystem

This collection was destined for success from the beginning. With a pre-marketing campaign focused on Twitter and a large presence on Discord, it generated an impressive pre-release FOMO.

On the other hand, it may be familiar to us today, but the idea of NFTs not being static was a novelty at the time. These invisible characters move gracefully as they capture the attention of the cryptocurrency world.

The 5,000 units of the Invisible Friends were developed by Swedish artist Markus Magnusson, a detail that alone boded well for the future of this collection. These friendly characters have definitely earned their place on this list.

Within a short time, the Doodles have become one of the most beloved and popular NFT collections in existence. The collection of colourful line-drawn characters has literally spread around the world and ranks high on the list of the best PFP collections (profile image) in terms of popularity and sales volume.

Within the Doodles ecosystem, there are humans, cats, apes, skeletons and also aliens. Instead of releasing a new collection of NFTs to complement their original collection, the Doodles team has implemented a mechanism for Doodles owners to exchange their NFT for a new spaceship-themed one.

The artist Burnt Toast is the one who has been behind the creation of this lovely collection. Twitter has been the social network with the largest presence of Doodles, where proud Doodle holders use them as their PFP.

Without a doubt, BAYC is one of the most popular NFT collections. The idea of the Bored Ape Yacht Club, was born in reference to the concept “Ape in”, which can be translated as “buy a new project without thinking too much about it”.

Created by Yuga Labs, these monkeys have reached impressive popularity, which has been well accompanied by exorbitant prices. Here we have found celebrities such as Justin Bieber and Jimmy Fallon. Not only they buy some BAYC but also they use them as their profile picture on their social media.

These 10,000 boring monkeys have 170 possible traits and their launch value was 0.08 ETH. Today, with the popularity of NFTs on the decline and a general market that does not accompany either, we find the lowest price at about 78 ETH. While that’s a large amount of money, it pales in comparison to the sale of Bored APE #2078 for a whopping 769 ETH.

A feature, which has been highlighted is that their owners has a membership card for a Yacht Club. In it, luxurious private, are carried on.

However, Yuga Labs has continued to add to this collection. Let’s see how.

It consists of a collection of 20,000 mutant apes that are created by exposing the Apes to a Serum, which is also represented as an NFT. After the original mint of only 10,000 NFTs, Yuga Labs sent each of its owners Mutant Serum to turn their simple Monkey into a Mutant Monkey.

After the success of this collection, Yuga Labs decided to release an additional 10,000 Mutant Apes. With a selling price of 3 ETH, just one hour after launch, they managed to raise $96 million.

Of course, these figures exploded once the collection hit the secondary market. Undoubtedly, one of the most important features of this collection is its community. Created exclusively for Mutant Ape holders, via Discord they organize themselves to participate in the purchase of new NFT collections.

Otherdeed For The Otherside

Metaverses were the hottest thing in the cryptocurrency world in late 2021 and the first quarter of 2022. As you can imagine, Yuga Labs would not let this opportunity pass by. So, Otherdeed consisted of launching the Bored Ape metaverse lands.

The results were incredible. Ethereum became hugely congested and people ended up paying over $5,000 just for their transaction alone to mint a land.

Prior to this minting event, Yuga Labs created their own cryptocurrency, called APE. Of course, to mine a land in Otherdeed, the only means of payment was this currency. Perhaps now we understand, why Yuga Labs is so important within the NFT universe. Its loyal followers are still waiting for further developments in this metaverse.

The Bored Apes collection, a symbol of the rise of NFTs popularity

In June 2017, the Larva Labs team launched the Crypto Punks project. From my point of view, the most popular project in the short history of the NFTs. It was composed of a series of 10,000 unique and unrepeatable NFTs. They were inspired on the London Punk scene, the cyberpunk culture and certain novels that gave impulse to this movement.

Each one of them, a simple digital image, possesses unique and unrepeatable features. Which added to the historical weight of being the first major NFT project generated on the Ethereum network, provide each Crypto Punk with an extremely high collectible value.

Beyond having been surpassed by the Yuga Labs collections in terms of volume, in particular sales, no one beats the Crypto Punks. Furthermore, when we mention the word NFT, it is extremely likely that the first image that comes to mind is that of one of these funny pixelated punks.

Their biggest sales have been the following:

Evidently, this endearing collection has brought great joy to its holders.

In this article, we have reviewed only one function that NFTs possess, their ability to recreate digital art. Although the most fierce critics indicate that it is not art, NFT collections have been extremely valued by their followers.

There are more than a few who say that the NFT fever is over and the huge amount of sales volume we have seen in 2021 is gone, and it would never return.

While it is true that the sales values of NFTs have fallen hand in hand with their popularity, new collections continue to appear day by day and achieve great popularity. There is definitely room for collectors in the crypto world and NFTs will not cease to be mined.